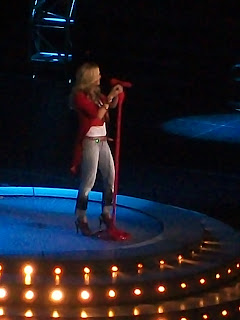 When I went to see Carrie Underwood in concert last night, I had previously made the decision that I was going to take a break from a being a critic, and for one night just be a fan.  I fully intended to have a great time, and that I did.

Carrie's Evansville concert kicked off with an opening set by Sons of Sylia.  This country-rock trio gave an energetic performance of their songs "Love Left to Lose," "I'll Know You," and others.  The highlight of their set was when they played some "old school bluegrass music," which they played "as fast as possible."  Apparently, they did indeed mean fast, as they only played it for about thirty seconds.

Billy Currington took the stage next, performing a selection of his hits.  He kicked off his set with "That's How Country Boys Roll," and then launched into "Why, Why, Why."  He also performed a couple of album tracks that have not been released as singles, including "I Wanna Be a Hillbilly" from his album Doin' Somethin' Right, and the horn-infused "Love Done Gone" from his current album Enjoy Yourself.  Obviously, his set would have been complete without the requisite hillbilly beer-drinking anthems, such as "Pretty Good at Drinkin' Beer" and "People Are Crazy."  I was in an especially jovial mood last night, and there were a few instances when I clapped and sang along to songs that would normally provoke me to change the radio station.  Billy then performed his new single "Let Me Down Easy," and closed his set with "Must Be Doin' Somethin' Right" and "Good Directions." 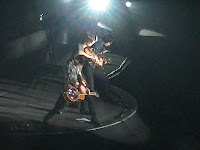 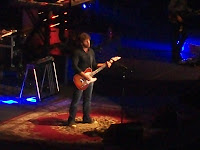 And then it was time for the lady herself to take the stage.  The crowd went wild as Carrie emerged on a lift from beneath the stage, sitting on a divan, singing "Cowboy Casanova."  She then launched into performances of "Quitter," "Wasted," "I Know You Won't" and "Some Hearts." 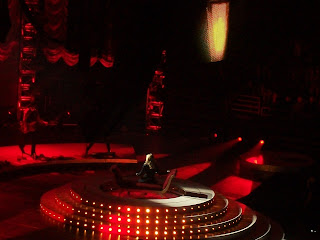 After a quick costume change (There were seven costume changes altogether, in case anyone was wondering), Carrie performed her ballads "Just a Dream" and "Temporary Home," and then strapped on an acoustic guitar for a performance of "All-American Girl."

At one point in the show, Carrie was lifted above the crown in a pickup truck as she treated the crowd to a cover of John Denver's "Take Me Home, Country Roads."  After getting the crowd pumped with "Undo It" (I even sang along with "Undo It," which should tell you just how giddy I was), Carrie sang "Jesus, Take the Wheel," following that performance with a sampling of "How Great Thou Art." 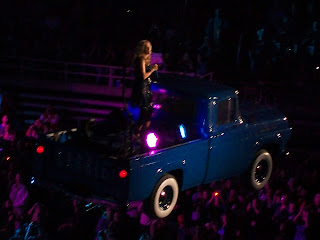 Sons of Sylvia joined Carrie on "What Can I Say," their duet from Carrie's Play On album.  Next, Carrie spoke to the audience about her deep connection to the Grand Ole Opry, and performed "I Told You So" in front of a backdrop of the Grand Ole Opry stage.  "Tonight we're bringing Nashville here to you," she announced.  "Welcome to the Grand Ole Opry!"  She was accompanied by video footage of Randy Travis singing the song with her in a virtual duet.  I enjoyed getting to pretend that I was at the Opry, and Carrie's re-creation of the Opry stage was quite possibly my favorite moment of the show. 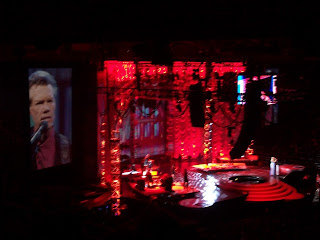 Carrie accompanied herself on piano as she sang her latest hit "Mama's Song," as old family photos were shown on the screen backdrop.  After a final costume change, Carrie performed one of her signature tunes, "Before He Cheats."  The show ended with Carrie's performance of "Songs Like This."

To say that Carrie's vocals were spot-on would be quite an understatement.  Her performances were full of energy and emotion.  In between songs, lively stage banter kept the audience thoroughly entertained.  It was an evening of fun, excitement, surprises, and showstopping performances.

Carrie's Play On tour continues on through December, wrapping up on January 1, 2011, in Atlantic City, New Jersey.
by Ben Foster