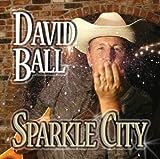 David who? Yes, this is the same David Ball that produced hit singles such as "Thinkin' Problem" and "Riding with Private Malone." He has returned with his first new album in six years, Sparkle City, accompanied by his backing band, the Pioneer Playboys. When a band has a name that includes the word "Playboys," this is exactly the type of song you expect to hear from them.
David's new song describes a cold winter night. He sings about stacking logs next to the fireplace, and piling blankets on the bed. The weatherman says it's going to be a cold one. Now here comes the song's title hook: "Hope it don't freeze up my hot water pipe." You heard the part about piling blankets on the bed, right? That's right - this song is another sex metaphor set to music. Take your best guess at what the term "Hot Water Pipe" is referring to. Beyond that, the song doesn't have much to say. The chorus largely consists of David repeating the phrase "Hot Water Pipe" over and over again. The entire song is built around a tacky sex joke.
Oh David, why are you trying to rekindle your career with a song like this? Give us anything but this. Give us a clever story-song with a surprise ending. Give us a tear-jerking breakup song. Give us a corny love song, or give us a lousy cover song. But for God's sake, I don't want to hear you sing about your hot water pipe. The only positive thing I can say about the song is that it has pleasantly twangy instrumentation, and a good bouncy beat, giving it a distinctly country sound. But in country music, the lyrics are the most important thing, and these lyrics are horrendous. No amount of twang could possibly be enough to polish this turd. But if it weren't for the good production, the low score that follows would be even lower.
It is understandable that David is trying to gain attention and exposure for his new music. But spitting out trash like this is not the way to resurrect his career. Country radio, please don't touch this one.
-
DAVID'S SCORE: 3
(Scores are given on a scale of 1 to 10)
WATCH THE OFFICIAL MUSIC VIDEO: http://www.youtube.com/watch?v=3PqAGB5EFwQ
by Ben Foster