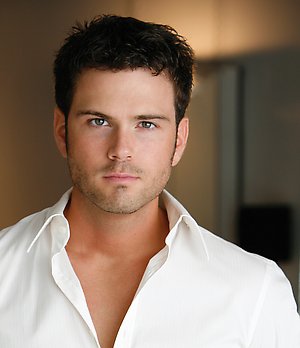 When his debut single, "Stealing Cinderella," raced into the Top 5, Chuck Wicks' career started off with a bang. But afterwards, each single he released became less successful than the one before it. "All I Ever Wanted" missed the Top 10, and "Man of the House" barely wiggled its way into the Top 30. His popularity was boosted by a highly-publicized relationship with Julianne Hough, as well as their appearance on Dancing with the Stars. Now he has released the first single from his currently untitled second album, and he really needs to score another significant hit if he wants to avoid being written off as a one-hit wonder.
After giving this song a listen, I have good news and bad news. The bad news is that the lyrics make him sound a little desperate for attention. The song begins with the narrator telling his other half to picture the two of them lying in bed in the candlelight (Possibly speaking to her on the phone, as the lyrics indicate that they are apart). He tells her to let her mind run wild, and to imagine what the two of them will do together once they are reunited, and then he tells her to "Hold That Thought." It sounds like Chuck is trying to draw attention, and thus garner radio airplay, by getting sultry and sexy. That's not very artistic.

And now, here is the good news. The second-rate lyrics are elevated by the melody, production, and vocals. The song has a beautiful slow waltz tempo. In addition to the steel guitar fills, the song is backed by organ, giving it a unique bluesy vibe. The song is expertly sung - Chuck sounds more soulful than ever before. He and his producers have definitely succeeded in creating a tune that sounds genuinely different from anything else that is currently on the radio. Thus, despite the lyrical shortcomings, "Hold That Thought" is anything but forgettable. I think Chuck Wicks may have another hit on his hands.

CHUCK'S SCORE: 7
(Scores are given on a scale of 1 to 10)
SEE THE OFFICIAL MUSIC VIDEO: http://www.youtube.com/watch?v=N9UukiyDg7c
by Ben Foster