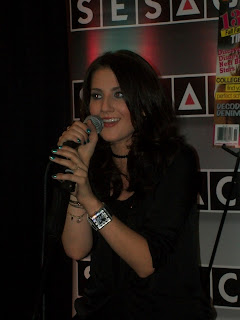 On Wednesday, September 29, a large crowd packed into SESAC to hear Cold River Records artist Katie Armiger perform an acoustic set of songs from her upcoming third album Confessions of a Nice Girl.  She was joined onstage by several of her co-writers.  During her set, she shared several stories of how she was inspired to write some of the songs.
The event was streamed live online, and watched everywhere by fans from the U.S. to Scotland.

In between songs, Katie answered questions submitted by her fans.

What was your favorite song to write?
"I would probably say 'Best Song Ever.'  I wrote it with Amanda Flynn and Bruce Wallace.  We were, you know, in Amanda's Jeep driving through Kentucky, which is where she lives - well, she lives here, but which is where she came from.  I was so much fun!  I just never had that much fun writing a song.  We were technically on retreat, but we wrote a song during it."

How old were you when you first sang, and thought to yourself, "This is what I want to do"?
"I don't even remember.  My first memories are when I was like a teeny teeny toddler, and my mom loves to tell this story where I was kicked out of preschool, because I was not a problematic child - I was just more mischievous.  So I would get put in time-out a lot, and I would just write songs in time-out about how much I loved being there, and I would make those teachers so mad that they would be like 'We can't watch her anymore.  Send her to another preschool,' and I just always knew that I wanted to sing."
﻿﻿
Where can we see you again?  Do you have anything coming up on television?
"I do!  I'm going to actually be on the CBS Early Show on October 9th.  We just confirmed it today.  We're very excited.  So you guys can watch it."

Is there going to be another tour?  Do you have plans to do dates, and travel the country so we can go out and see you live?
"Well I definitely have plans to be doing a radio tour, so we're going to try to promote this album so much, and with everything that we can, so definitely we'll be traveling around, and I'll post it on Facebook, on my web site, on everything, so you will know when I'm performing!  Just stay in touch."

When your album goes on sale on October 5th, are you actually going to go to a store and buy your own CD?
"You better believe it, yeah!  I'm gonna be that person that buys every single copy in the store.  I figure if I spend like a hundred dollars on myself, it won't really matter maybe."


WATCH VIDEO OF THE EVENT
by Ben Foster