Jennette McCurdy, "Not That Far Away" 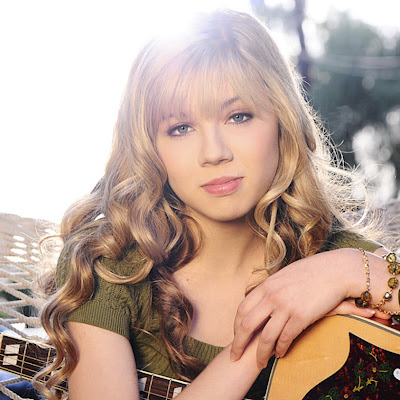 You might not recognize this girl, but your teenage daughter probably does. This 17-year-old starlet first gained a teen fan base as one of the stars of Nickelodeon's popular sitcom iCarly. She recently got a record deal, and now she has gone country. Jennette offered her fans a rare treat when she allowed them the opportunity to vote for the song that they wanted to be her debut single. Fans were given several song samples to choose from, and "Not That Far Away" was the song they picked. It officially hits radio today.
=
The song is about a girl who travels from California to Nashville to pursue her dream of country stardom. As the chorus kicks in, she promises to call her mama every night, and assures her that she is "not that far away." The lyrics include several poetic lines such as "I'm just tryin' to write the story of my life." One of the song's advantages is that it is age-appropriate. Many aspiring teen country stars (such as Katie Armiger) have made the mistake of singing songs that are better suited to adult artists, which has hindered their success. But Jennette avoids making that mistake. Instead, the song sounds like a realistic depiction of where she is in her life and career.
The song has slick and polished pop-country production, and it is capably sung. Jennette does seem to have some talent, but her debut single shows a notable weakness in that sounds a little bit like a Carrie Underwood knockoff. That makes comparisons between Jennette and Carrie inevitable, which exposes Jennette's relative lack of vocal control and power. If Jennette wants to establish her own identity as an artist, her producers need to help her develop a style of her own. We already have a Carrie Underwood, and she does a fine job of filling her role, so there's really no need for a new one. Being a new artist, Jennette needs to stand out among her radio peers if she is to make a name for herself in country music. She can't do that by copying Carrie. That's especially important if she wants to be taken seriously as a performer, despite being a teenager and an actress-turned-singer.
Jennette's debut single shows evidence of untapped potential. With reliable guidance, she just might have what it takes to join the club of platinum blonde country hitmakers.
JENNETTE'S SCORE: 6
(Scores are given on a scale of 1 to 10)
HEAR IT: http://www.youtube.com/watch?v=7vep3nr0wYM
by Ben Foster