The year 2010 marks 50 years since the iconic Loretta Lynn signed her first recording contract, and released her debut single "I'm a Honky Tonk Girl."  The famed coal miner's daughter celebrated the milestone at a special invitation-only event on September 24 at her ranch in Hurricane Mills, Tennessee.
On hand for the event were several members of Loretta's family, including brother Herman; sisters Peggy Sue, Betty Ruth, and Crystal Gayle; and daughters Cissy, Peggy, and Patsy.  The evening's activities included a catered reception with speeches by Crystal Gayle, Marty Stuart, John Carter Cash, and others.  A concert performance by Crystal Gayle, which was open to the general public, followed later in the evening.
Before all this began, Loretta and Crystal sat down for a media question-and-answer session inside the Coal Miner's Daughter museum.


One question on many people's minds is how Loretta manages to stay so humble and grounded after having accomplished so much in her career, and having won so many awards.  "Honey, I look at these awards like they're somebody else's," Loretta answers.  "That way you can stay grounded.  I'm proud of my awards, and every one I get I'm even more prouder of.  Staying grounded - You just don't forget where you come from.  All I do is just close my eyes, and I know where I'm from.  You know, I just go back to that little one-room cabin where I lived 'til I was eleven years old."
Loretta also talked about the deep connection she feels to her legions of loyal fans.  "They're my friends; They're not my fans.  You know, I've met 'em over and over and over, so really that's it.  I still enjoy goin' onstage.  I enjoy it more now than I used to, 'cause used to I had to.  Now I don't have to, and I go when I want to, and I really enjoy it.  And my babies are big as me right now, my twins [Peggy and Patsy], so it's easy to work when they're grown like that than when they're little.  And I take the twins with me.  They work with me.  But when they were little I liked to stay home more, and now that they're grown, why stay home?  I still enjoy it, and I like it, so I get after it!"
In addition to talking about touring, Loretta discussed her connection to the show that made country music famous.  "Well the Grand Ole Opry was somethin' I listened to when I was a little girl.  Never dreamed that I'd ever go through the door of the Grand Ole Opry when I was little and we listened.  That was just radio at that time, and I listened to Roy Acuff and Ernest Tubb and Oswald and Rachel, and it was somethin' I never dreamed of doin'.  But the Grand Ole Opry is somethin' that every country singer dreams of bein' on.  It is the greatest show on earth." Another hot topic was the all-star Loretta Lynn tribute album - the Sony release Coal Miner's Daughter - a Tribute to Loretta Lynn - which drops on November 9.  Loretta hand-picked each artist who would appear on it.  "It was hard to narrow it down, you know, because there was so many great ones.  I love Kid Rock.  He sung that song that I wrote called 'I Know How.'  I don't know if any of you have heard it or not, but you'll have to listen to it.  It's great!  He done somethin' with it I didn't do.  In fact, all the artists have done stuff to my songs that I didn't do, and I love it.  I really love it."
But were there any artists that Loretta wanted to have on the album that weren't able to do it?  "Oh yes," she replies.  "But when you just got an album, you know, you can't put everybody on 'em.  Me and my sister is gonna do an album together, me and Crystal.  We been sayin' that for years.  I said 'You know, there's no use talkin' about it.  Let's just go in the studio and do it!  We've got to get it done.'"  At this point Loretta turns to face her sister saying, "And Crystal Gayle, you need to help me do that!"
﻿
﻿
A collaboration between Loretta Lynn and Crystal Gayle - who wouldn't love to hear that?

Of all the hit songs Loretta has had over the course of her career, her autobiographical song "Coal Miner's Daughter" easily ranks as her most-remembered and best-loved hit.  But did she see it as a surefire hit when she released it?  No, she did not.  "You know I had six more verses to that song?  And I went ahead and I sung it to Owen Bradley, and he looked at me and he said 'Loretta, there's already been one "El Paso," there'll never be another one.'  He said 'Go in there somewhere and sit down and take six verses off,' and that's what I had to do.  So I just thought it was just another song with people talkin' about their lives, you know.  I didn't think about it ever bein' anything.  But it was a smash, and I'm real proud.  I'm proud to be a coal miner's daughter!  I am!"


Loretta says that she continues to write songs today.  "Well, you know when I think of a good title, I write it down, and me and Shawn Camp wrote quite a bit last year.  We haven't wrote this year,  and I don't even think somethin's wrong with me, but I just couldn't get into it this year!  I don't know why.  But a song title will come to me, and I'll write two or three lines, and get the melody to it.  But Shawn is a great writer.  He's a great writer, so me and him have to start back writin' again.  We wrote quite a few that I've recorded, and we got two or three more already wrote that I'm gonna cut.  He's s'posed to come tonight.  I don't know if he will or not.  He's probably mad at me 'cause I hadn't wrote with him," Loretta jokes.  "No, he ain't that kinda guy."
The upcoming tribute album features a re-recorded version of "Coal Miner's Daughter," which includes vocals from Miranda Lambert and Sheryl Crow.  "I love Miranda," Loretta says.  "I think she's just feisty enough that she can do anything she wants to do, and she's a great little singer - great country singer.  Now I'm not sayin' pop, 'cause me and her neither one are gonna go pop.  If we do, it'll shock me!  But Sheryl, you know, she cuts rock and she cuts pop, but we did 'Coal Miner's Daughter, the three of us."
Speaking of pop, how does Loretta feel about all of the pop-country that is heard on country airwaves?  "I love the old country music - don't get me wrong.  But I love the pop-flavor country songs that they come out with too.  I like the polished country music that they do today.  Now I'm not sayin' I can do it, but I love it.  But I love the old country, and I love the new."

﻿﻿﻿﻿Crystal Gayle shares her sister's opinion.  "There's a lot of really good artists out there.  As Loretta was saying, it is a little bit more of what the pop music of the seventies was, and I liked the pop music then.  Everything changes, and there's always a time and a place.  I definitely don't want them to forget in radio the true country as well."


"I'm so proud of my sister!" says Crystal.  "I'd turn that radio on, and there she was!  I knew every song by heart... until she told me to quit singin' 'em... I love my sister, and I love her music.  When you think of country music in Nashville, you think of Loretta Lynn.  Not just because of the music, but of her as a personality, and her love of country, and her promotion of country.  She's all over the world.  That has opened up the doors for country music through the years, and I just think it's great.  It's even greater that she's my sister!"
﻿
﻿ 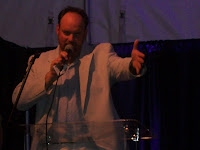 At the following reception, Marty Stuart had further kind words for Loretta.  "She's one of the most awarded females in the history of country music.  This museum attests to this, so that she might share the many accolades she has with us... A few years ago, a journalist mentioned her - that she was the Queen of Country Music.  'Kitty Wells is the queen.  Tammy Wynette is the first lady'" ("I thought that was Connie Smith," Marty jokingly added) "'I'm just the coal miner's daughter,' Loretta said.  Kitty Wells might have been the queen to a lot of people, but I agree with the reporter."
It was a special night for Loretta, and for all of country music.  But, as Crystal Gayle rightly pointed out, this was just Loretta's first fifty years.  "We'll have to open a new museum for the next fifty."
by Ben Foster